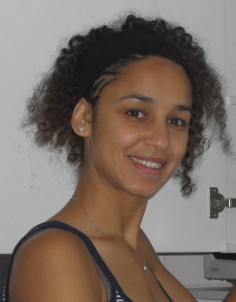 Hazar Guesmi earned her Ph.D. degree in Materials Science at the University of Aix-Marseille III, France (2005). She performed her doctoral work on both theoretical and experimental aspects of physics and material science under the supervision of Prof. P. Müller and Dr. G. Tréglia at the "Centre de Recherche de la Matière Condensée et des Nanosciences" in Marseille where she studied the adsorption/desorption mechanisms of antimony on silicon (111) surface.

From 2005 to 2006 she was employed as an assistant professor at the university "Pierre et Marie Curie", Paris VI (currently Sorbonne université). During that period she studied the ordered growth of gold nanodots on the prestructured copper templates (Institut des NaonoSciences de Paris) in collaboration with B. Croset and G. Prévot.

In September 2006 she obtained Post Doctoral grant via the European Network of Excellence and she worked for two years at the CNRS/ENSCM in Montpellier. In collaboration with D. Berthomieu, she developed kinetic and thermodynamic studies of DeNOX reactions on Fe-ZSM-5 zeolites.

In October 2008 she was appointed as a permanent CNRS researcher in the "Laboratoire Réactivité de Surface" in Paris (Sorbonne université) and after four years in the Latin quarter, she moved again to Montpellier. There, since 2013, she integrated the MACS team at "Institut Charles Gerhardt" where she is currently working on Surface Science and Computational Catalysis.